The Staying Power of Glass is Becoming Crystal Clear

As debate intensifies over the need for consumers to reduce their use of plastics due to recycling and disposal challenges, one thing is certain: glass will always be the preferred material for dynamic, optical and flat panel display applications. Compared to plastic, glass offers exceptional clarity and robustness for scientific, industrial and consumer uses alike.

What’s more, high quality glass offers less distortion than plastic because it has a better surface form and refraction index, allowing more light to pass through, which provides better image clarity. Plastic can also be scratched easily, is less durable than glass and can be accidentally melted through contact with a hot source. It’s also less resistant to chemicals.

Several years ago, a well-known public company developed a smart, head-mounted optical device that was supposed to make ubiquitous computing (ubicomp) a reality. The effort has been uneven due to various technical challenges, but someday soon we may all be able to use this technology to interact with computers from anywhere, faster than we can with our smartphones.

That’s because the advanced optics which make augmented reality (AR) possible are reaching a level of development that could make the technology user-friendly and affordable. In fact, Apple CEO Tim Cook has referred to AR as a “core technology” (no pun intended, presumably) as the company continues its R&D efforts on that front.

As consumers, it’s “back to the future” with glass, a material that was used in southeast Asia more than 2,100 years ago to store foods and beverages. Perhaps our forebears across the Pacific, as well as the English settlers in Jamestown, VA, who built a glass melting furnace following their arrival in the Virginia Colony in 1603, were onto something.

Just as glass is highly beneficial in many commercial applications, as noted earlier, the material when used in food packaging offers a trifecta of benefits related to taste, health and sustainability.

Because glass is non-porous and impermeable, it does not interact chemically with the packaged product. It also prevents chemical interactions between the product and the external environment from occurring, so food and beverages retain their original constituency regarding strength, flavor and aroma. Furthermore, the U.S. Food and Drug Administration (FDA) rates glass as the only type of food packaging which is “generally recognized as safe” (GRAS), the agency’s highest standard.

Research has shown that people prefer the taste of foods and beverages packaged in glass, especially, wine, spirits and beer, because glass preserves flavor better than other kinds of packaging such as plastic, aluminum and paper.

When it comes to health benefits, an increasing number of people are becoming concerned about the constituents in plastics, such as BPA (bisphenol A) and phthalates, used to package many of the things we eat and drink. Regardless of whether chemicals seep from plastic into edible or potable product, many people perceive they do, and as the saying goes, “perception is reality.” The result is that manufacturers may need to re-think their packaging strategies if they are committed to preserving or growing market share.

This trend tracks with an increasing desire among consumers to eat foods that are less processed than those on which they may have been raised, hence the challenges faced by many traditional food manufacturers such as KraftHeinz, which is co-headquartered in Chicago and Pittsburgh, where we’re based.

The preference for glass over plastic aligns with people’s desire to consume healthful foods and beverages that can be seen clearly before opening the packaging. Stated another way, simple ingredients in glass jars remind health-conscious consumers of home-made foods from days gone by – times that they may have only read about, seen in the movies or heard older relatives describe.

From an ecological perspective, environmental concerns related to the disposal of plastics has made many consumers sensitive to the effects of their lifestyle choices on the health of our planet. 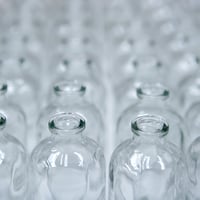 Even if glass bottles, jars and other types of containers end up in the ocean, they are less harmful to marine life than plastics, in addition to being completely recyclable. With glass recycling accessible to about 80% of the U.S. population, a different way of packaging our foods and beverages on a large scale is within the realm of possibility.

Besides glass’s recycling properties being highly beneficial to society, such containers can also be refilled. Until the late 1960s or early 1970s, it was necessary to return glass bottles to grocery stores to receive credit for them. The grocer would then send the empties to beverage manufacturers (bottlers) or brewers, who would sterilize the bottles, refill them with pop/soda or beer and ship product by the truckload back to retailers.

A Small Price to Pay?

Returnable bottles and cans with deposits are the norm in a handful of states (California, Connecticut, Hawaii, Iowa, Maine, Massachusetts, Michigan, New York, Oregon and Vermont), but that aspect of American life may soon be changing as concerned citizens, especially millennials, lead the charge for helping to improve the environment and public health.

Whether you make dynamic, optical or flat panel display glass, your time to enjoy an adult beverage after a challenging day at work without having to return the bottle (or can) to the store may be limited. From our perspective, however, returning bottles to the store is easy way for all of us to help improve the condition of our environment. In fact, you may live in a state where it’s been a way of life for years.

Studies have shown that returnable beverage container laws have reduced total roadside litter by between 30% and 64% in the states with “bottle bills,” and that most residents in states without such laws want to enjoy the improvement in their states’ appearances that such laws would bring.

It’s also important to note that glass recycling generates small amounts of waste, and glass can be recycled without sacrificing quality of the glass container, nor of the contents it houses.

According to research, every kilogram (2.2 lbs.) of recycled glass eliminates the need for 1.2 kilograms (2.65 lbs.) of raw materials. In fact, about 80% of recovered glass containers are made into new containers, and the entire process from recycling bin to store shelf can take as little as 30 days!

The food and beverage packaging industry is no different from other industries, including ours, insofar as new technologies are always replacing older ones.

When it comes to our sustenance, do you think a growing desire for wholesomeness and transparency is creating a situation in which something old is new again?

Golf wearables can help to knock shots off your handicap.

With the weather warming up in many parts of the country, golfers are likely to be hitting the...

How Can I Keep My Glasses from Sliding Down My Nose?

Regardless of your age, having a pair of glasses that rests comfortably on the bridge of your nose...

Although everyone who exercises prefers a different workout routine, every routine has one thing...